Ambala is situated in the state of Haryana. Ambala is positioned close to the Punjab border and has a sturdy presence of both the Indian Air Force and the Indian Army. Ambala is a significant travel center for several tourists who visit Punjab, Himachal Pradesh and Jammu and Kashmir.Â The memorial placed at the Ambala Airport is devoted to the brave soldiers who lost their lives in war. There are several important religious sites that are situated in and around the city. These include both Sikh as well as Hindu sacred places. There are three most important Gurudwaras that are situated in the city and these are the Manji Sahib Gurudwara, Sis Ganj Gurudwara and Badshahi Bag Gurudwara. These are related with the three main gurus of Sikh religion.

HOW TO REACH
By Air:-
Delhi Airport is the nearest airfield to Ambala, located at a distance of 200 km. It is one of the biggest airports of India and hence, it connects with almost all the major cities of the world such as London, Paris, Abu Dhabi, Dubai and various other places. From the airport, one can get a taxi to reach Ambala.

By Rail:-
The city itself has one of the oldest railway stations of the country and it is well linked to various places of the nation by 250 trains that run from here on a regular basis.

By Road:-
The Haryana state transport buses as well as the private buses operate from Delhi to Ambala on a frequent interval. A/C as well as Non A/C buses are available from here that cost a very reasonable amount. Delhi is around 210 km from Ambala. Other cities connected to Ambala are Chandigarh (45 km), Patiala (50 km), Amritsar (248 km) and Shimla (151 km). 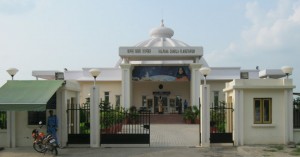 Planetarium at Ambala is among country’s first planetariums, established in the 1950s. The planetarium was dDesigned by Pandit Jagannath Sharma who was, a spearhead in the scientific instruments manufacturing industry. One of a kind, The dome structure of the planetarium grabs attention. of visitors.

Air Force Base in Ambala, an inherited British airbase, is one of the oldest and largest airbases of Indian Air Force. The airbase played a vital role in 1947-48 Kashmir Operations, when Spitfires and Harvards were operated from the base.Over the years, Air Force Base has housed various aircrafts like Vampires, B-57, Hunters and Ouragans. At the moment, the airbase houses MiG-21 Bisons and 7-Wing with squadrons of Jaguars like No. 5, No. 14 and No. 23.The Flying Instruction School (FIS) was established at the base in 1948, but was resituated to Tambaram in Chennai in 1954 due to Pakistan warfare. War memorial was dedicated to aircrew whothat lost their lives in war and flying missions from the airfield, known as ‘Jatt Di Pasand’ is a major highlight of the base.

Rani ka talab is one of the historic testimonies, of the town built by Raja Ranjit Singh of Chhachhrauli. The 400 year old pond is positioned within Ambala Cantonment. and is currently under the authority of Indian Army. Along with the pond, there is an ancient Shiv Mandir and Devi Mandir, managed by the Indian Army.According to historians, the king of Chhachhrauli dug up two ponds,named one was called Raja Ka Talab and, whereas the other one was Rani Ka Talab. Raja Ka Talab was turned into a modern park, known today as a Patel Park., which was called Company Bagh during British regime.Construction of both the ponds was identical with both featuring Lord Shiva temple on itâ€™s banks.

Anandpur Sahib is one of the five most important pilgrimages for Sikhs. Abode of joy, tThe pilgrim centre is situated along with Naina Devi hills in itâ€™s backdrop. The worship place It is believed to be the place of baptism of Sikh community known as Khalsa – the pure ones. Jain Mandir is one of the most revered worship centres in the region and, which is believed to house 2,500 years old idols. Situated at Ambala Sadar, the shrine houses four idols of Jain deities in the temple. According to the folklore, the Jain Temple was established 150 years ago.

Gurudwara Manji Sahib is situated on the National Highway 1, known as Sher Shah Suri Marg. The Sikh shrine wasis constructed at the place visited place by the sixth Guru, of Guru Hargobind Singh on his way to meet Mughal emperor, Jahangir. Gurudwara Manji Sahib also features a pond and a baoli (well), which is believed to have been constructed during the stay of Guru Hargobind Singh.As per the legend of the shrine, the villagers of Majri complained of the water scarcity. Addressing their issue of perennial water shortage, Guru advised natives to dig a baoli.

Ambika Devi Mandir is not only the oldest shrines but also an origin of the place. Dedicated to Goddess Amba, Ambika and Ambalika, the ancient Hindu shrine was constructed before the British Raj. One of the highlights of the temple is the paintings on the upper walls and ceilings., which have faded over the years.The ancient Hindu shrine is situated close to the old civil hospital, which can be approached by road. from any part of the city.

Located towards the outskirts of Ambala, Paget Park is a popular recreational destination. The well manicured lawns and trees attract a lot of visitors, especially during the evenings and on weekends. The perfect place to spend a peaceful day with the whole family, Paget Park is maintained by the Municipal Corporation of Ambala.This park has an exclusive children’s play area and a jogger’s path. Other than spending a leisure evening at the park one can also visit the 14th century St. John’s Cathedral which lies adjacent to the park.

Holy Redeemer Church was built under the British rule, when troops of East India Company were transferred from Karnal to
Ambala. Moreover, there is an ancient residence of a priest within the church compound.Constructed in 1848, the catholic church also features two rooms initially made for the troops, which are used as a dispensary and a reading room at present. The church was visited by Lord Ripon, the only Catholic Viceroy of India, during his visit to Shimla.The church collapsed and a new church was constructed at the same place in 1905.

Cloth Market Â is the charm of the city, which draws shoppers from surrounding areas. The cloth market has a dense an incredible cluster of 900-1000 wholesale shops.
The market possesses a wide range of cloth items-
Hand-loom,Â Silk and Sarees,Â Suitings and Shirtings,Â All kinds of dress material.

FOOD:-
The best Restaurants is available Â in Ambala City, Haryana you can Â get the food Â of your choice and preference.