Udaipur is well known for its beautiful lakes and the unique serene location, you’ll never find such exotic place anywhere else. Every year thousands of tourist all across the globe came here to witness the beauty of this romantic city. The city is declared as a heritage city and ideal for a traveller looking for both fun and information.


By Air:-
Udaipur Airport namely Maharana Pratap Airport is located near Dabok at a distance of 22 kms from the city of Udaipur. Many domestic airlines connect the city to all the major cities of India including Jaipur, Mumbai, Delhi, Mumbai and Kolkata. Regular air services are available for Delhi and Mumbai.

By Rail:-
Udaipur Railway Station is located at a comfortable distance from the city of Udaipur. Rajasthan Railways connects Udaipur station with all the other cities of Rajasthan as well as India. There are frequent trains which run to and from Udaipur connecting Jaipur, Mumbai and Delhi. One can also travel to this beautiful city by the luxuriousÂ Palace on Wheels.

By Road:-
Udaipur is well connected by road to major cities in India. Brilliant road network ensure people to enjoy a relaxed journey to and from Udaipur. This mode of commuting is quite easy and economical. Udaipur Bus Stand has regular bus services, connecting Udaipur with nearby cities including Delhi, Jaipur, Chittorgarh, Indore, Kota, Ajmer, Ahmedabad and Mt. Abu. Rajasthan Roadways provides the facility of Deluxe Buses and AC coaches for the convenience of passengers. One can also hire taxis and cars to reach Udaipur by road.

A majestic architectural marvel towering over the lake on a hill surrounded by crenallated walls, it is a conglomeration of courtyards, pavilions, terraces, corridors, rooms and hanging gardens. The main entrance is through the triple arched gate, the “Tripolia” with eight marble porticos. The maharanas were weighed under the gate in gold, the euivalent amount of which was distributed among the populace.

It is situated in the Fateh Prakash Palace is a breath taking collection of crystals. Maharana Sajjan Singh mainly ordered these crystals from F & C Osler England. But he could not see the crystals because of his untimely death. The crystal item includes tables, sofa sets, dinning table, dressers, fountains and even beds besides a whole array of washing bowls, decanters and perfume bottles. 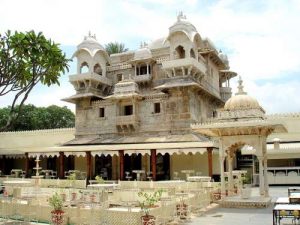 Â This is the other island palace in Lake Pichola, which was constructed by Maharana Karan Singh as a hideout for Prince Khurram the estranged son of Emperor Jehangir the implacable foe of the Maharana. The reason for the aid was that the prince was the son of a Rajput mother. It is also said that Shah Jahan [prince Khurram] derived some of these ideas for the Taj Mahal from this palace when he stayed there in 1623-24. The island has some striking carving including a row of elephants that looks as though they are guarding the island. The exquisitely carved chhatri in grey and blue stone is another example.

Built by Maharana Jagat Singh I in 1651 the temple enshrines a black stone image of Lard Vishnu. There is a brass image of Garuda the Lord bird carrier. The exterior and the plinth are covered with base relief of alligators; elephants, horsemen and celestial musicians rise in tiers. Chanting, bells and music can be heard throughout the day. It is the largest and most splendid temple of Udaipur. 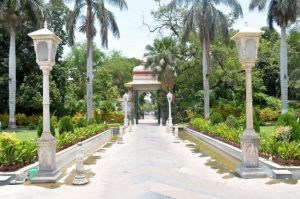 This small ornamental garden was a popular relaxing spot where royal ladies came for a stroll and hence the name. The garden has many fountains in its four delightful pools, chiselled kiosks and marble elephants.On the eve of his departure from Mewar, Col.Tod had shifted to it so as to have some needed solitude. Much later, a thoughtful had located a library in it.

Literally meaning a “Craftsmen’s Village” is a living ethnographic museum depicting the enormous diversities in craft, art & culture between various Indian states, but the exquisite terracotta work mainly in dark red and dark brown sand material along with the wooden carvings are the forte of this ethnic village . Shilpgram comprises 26 huts set in 70 acres of natural surroundings at the foot of the Aravali Hills.A colourful craft festival during winter seasons to the whole set up induces viatanity and zeal. 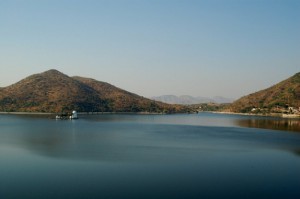 This delightful lake, bordered by hills and woodland was constructed by Maharana jai Singh to the north of Lake Pichola. It is an artificial lake dug up in 1678, reconstructed by Maharana Fateh Singh A canal links the two, via Swaroop Sagar and Rang Sagar Lakes. The beautiful Nehru Island as well as an islet bearing a solar observatory rises from the lake.

This is a very congenial old building built right on the waterfront of Lake Pichola at Gangori Ghat. Amir Chand Badwa, the Prime Minister of Mewar built it in the eighteenth century. The palace has over hundred rooms and some very interesting display of costumes and modern art. The glass and mirror in the interiors of the Haveli delicate work and well preserved too. It also preserves a fine example of Mewar Painting on the walls of Queen’s Chamber. The two peacocks made from small pieces of colored glasses are fine examples of glasswork. After the death Badwa the building became the property of Mewar State. 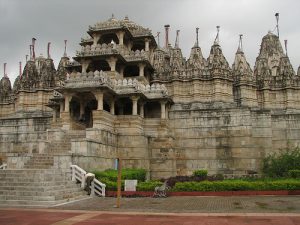 The famous Ranakpur temples are just 50 kilometers from Kumbhalgarh by the scenic route through Vanpura and Saira. Begun in 1438 by Rana Kumbha, Ranakpur became a strangely tranquil meditation center in a frequently war ravaged land. It also became a magnificent sculpture museum to which wealthy Jain merchants and ministers kept adding shrines and statues. The central Chaumukha Temple is dedicated to the venerated Tirthankara Adinath.

KumbhalgarhÂ is a stunning fortress built by Rana Kumbha in 15th century. The fort has perimeter walls that extend 36 kilometres in length. Claimed to be the longest in the world after “The Great Wall of China”. Over 360 temples are within the fort. 300 ancient Jain and the rest Hindu. The vista from the palace top typically extends tens of kilometers into the Aravalli Range.

The temple is situated 20km from Udaipur Eklingji is famous for its 108 temples complex. Built on a shore of a small lake surrounded by hills it is also known as Kailashpuri or the abode of Shiva.
It was built by Bappa Rawal on the side of 72 roomed jain temple which had a four faced idol of Adinathji , the first Jain saint. First built in 728AD , the main temple is made in white marble. Made of black marble , the four faced image of Mahadev (an icon of Lord Shiva) is worshipped as Eklingji.

The scene of the famous battle of 1576 AD fought between Rana Pratap, the heroic son of Udai Singh and the massive forces of the Mughal Emperor Akbar. A beautiful ‘Chhatri’ with white marble columns, dedicated to Rana Pratap stands here. 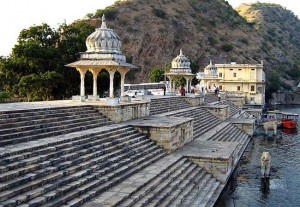 Jaisamand Sanctuary is situated 50-km south of Udaipur, the picturesque ‘City of Lakes’, succulent valleys and hills. It is on the bank of Jaisamand Lake, the second largest artificial Lake in Asia.

SHOPPING:-
Udaipur offers the exquisite variety of handicrafts. They may range from toys, bewitching puppets, wall hangings, pen stands, cloth lanterns, handmade papers, painted wooden box to Greeting cards. Udaipur has an assortment pottery too that can be availed in both metal and mud. Pottery covers all kings of pots, plates, vessels and different kinds of containers. Apart from this, brassware and terracotta sculptures are also popular.

FOOD:-
There are so many good restaurants in Udaipur, suitable for all pockets. Our recommended must visit restaurants are Ambrahi, Sunset & the GalleryRestaurant at Fateh Prakash.